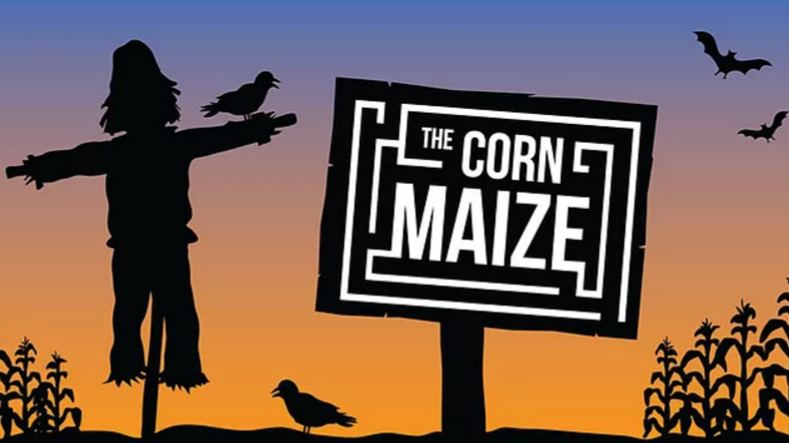 Their clever play on words in the title, The Corn Maize always makes me smile too. Because it’s a maze…and it’s made out of corn…and maize is Spanish for corn. Get it?

Anyways, this is the second year for our family to visit and I’ve got to say…it get’s better every year. I know that doesn’t mean a lot coming from someone who has only been going for two years, but that doesn’t change the fact that this place is even more fun this year than it was last year.

I will tell you all about our personal experience in a second, but first let’s tell you everything you want/need to know before you go.

Things you need to know

Bold items are things we did.

Children 2 years old and under are free.

Admission is $15 + tax and includes the Zombie Apocalypse tactical laser tag experience. Admission includes all activities and the regular maze. The Haunted Maize is open on Friday and Saturday nights from 8:00 pm – 11:30 pm. Last ticket is sold at 11:00 pm. Purchase of ticket admits one time entry to The Haunted Maize.

The pumpkin patch is free to walk through.

Pumpkins can be picked off the vine for anywhere between $3 – $9 based on weight.

Large specialty pumpkins are also available at an extra cost.

Now for Our Personal Experience

Alright, now you know everything you could have found if you went to their website, thecornmaize.com. Which, by the way, functions fine but is somewhat of an eye sore. Maybe they could use a web design company like, I don’t know, Goby Creative, to help them out. (**ahem** that’s a side hustle of mine)

However, what you couldn’t have gotten from their website is what you are about to get…right…now…

Some things we liked

The Corn Maize has a wide array of things to do. With everything from ziplines to Disney Princess meet and greets to a zombie apocalypse haunted maze, they have something for people of all ages. Sure, you could hava gathered that they had a lot of amenitites from their website, but you wouldn’t have known that my two year old had as much fun as the 12 year olds running around.

The corn maize itself can be navigated with a paper map (provided at the payment booth when you enter), or with a digital GPS map on their website. Sure, this is also on their website, but it’s not advertised very well and I thought soe people might like to know that this is an option. It’s one of the few place I’ve been to where you can choose between paper or glass. Below is an overhead view of the actual corn maze. The lines are the paths that have been mowed through the corn field.

We chose the paper because the kids could interact with it a little more easily. They have stations along the way that allow to punch various shaped holes in the paper. These different shaped holes are the verification that you completed the maze appropriately which the staff use to give your prize at the end. When you leave the property, don’t forget to turn in your paper…because they probably won’t remind you.

Finally, there were about six photography stations that were very well decorated and perfect for getting halloween themed pictures with the family. There was one photography station that had witches that started talking when you walked by. Melissa and I like to scare our kids sometimes, so naturally we walked by that one more than once.

Let me start this section by saying that none of these things should keep from visiting The Corn Maize, but all of them are things that Melissa and I wished we had known beforehand.

In general, the “cafe”, as they call it, doesn’t have a robust menu. To be fair, I didn’t expect much because it’s about half the size of a middle-school basketball concession stand, but your options were limited basically to hot dogs, nachos, potato chips, and waffles. Now, the hot dogs and nachos were really good, and the churro wafle was awesome. There just wan’t a lot of options.

The only tables available to sit and eat were under the pavilion. At first I thought this was a good thing, but about three minutes into the meal we all had our beanies and gloves on trying to eat our waffles and hotdogs.

It was freezing under there. What’s worse is the fact that they had some of those large space heaters sitting about 10 feet away, but not in use. Others after us alleviated this unfortunate situation by dragging the tables out from under the pavilion and into the sun. The staff did not seem to mind this at all, so I recommend moving the tables if this happens to you.

Finally, the only drinks they had were bottled soft drinks and water. In general that would’ve been fine, but two and four year olds don’t do big plastic bottles so well. We really wished there had either been cups to pour the drinks into, kid cups with lids and straws, or some way to know that we should consider bringing our own cups for the kids. Any of these things would’ve been fine.

In conclusion, I strongly recommend taking a day to visit this pumpkin patch / corn maze / dude ranch. It was a blast for everyone in our family. The sason is closing fast, so catch them while their open. If you go, drop a comment and let me know what you thought.

See you out there,